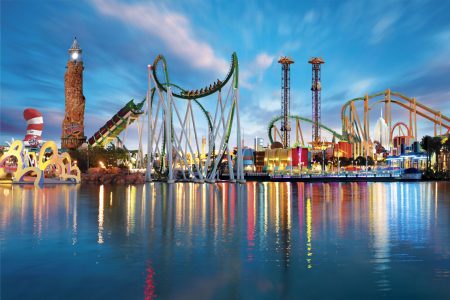 Transform your fantasies into a reality by visiting Orlando, FL.

Fall Under the Magical Spell of Orlando

Transform your fantasies into a reality by visiting Orlando, Florida, the most popular family destination on Earth. Drawing some 50 million visitors a year with its adrenaline-pinching theme parks and endless attractions, travelers of all types and ages flock to Orlando for its 100-plus attractions, year-round warm, sunny weather, swaying palms and nearby beautiful beaches that offer that “far-far-away” exotic appeal. Figure out for yourself why the young and young at heart are spellbound by the seemingly endless attractions and activities. Seeing your children’s faces light up as favorite characters come to life is a thrilling experience and must-have-camera photo opportunity. Inside America’s most popular playground bellies a sophisticated destination with glorious subtropical weather that’s perfect for all types of travelers looking for the perfect family vacation or couples getaway.

Along with the legendary attraction- and tourist-filled International Drive, downtown Orlando lights up at night with everything from casual to upscale and trendy places to sit sip and socialize when the sun sets, downtown Orlando is the place to do it, with jazzed-up blues bars, trendy upscale big-city hot spots, eclectic rooftop bars and café-style wine bars to cycle-pedaling tours, horse-drawn carriage and pedi-bike rides and swan paddle boat rentals across downtown’s landmark Lake Eola. Downtown streets are punctuated with a variety of bars and nightclubs that make it one of the hottest nightspots for locals and visiting tourists alike, with an environment that fits every mentality and mood for a fun night out on the town.

When it comes to attractions, Orlando’s “Big Three” have made it a world-famous destination that attracts visitors of all ages from all over the world in pursuit of the ultimate family vacation and a few dreams come true at all times of the year, thanks to Florida’s amazing weather. All Orlando attractions dazzle visitors year-round, but the Big Three are where your imagination comes to life, as you create unique, lifelong memories and exhilarating smiles spread across every face!

Magic Kingdom® Theme Park – With Cinderella’s castle as the epicenter, this is where all the Disney magic and its characters come to life. Along with its inspiring character-filled parades and an enchanting nighttime fireworks display with Tinker Bell flying through the sky, this fairytale park features 6 whimsical lands for you to explore – Fantasyland, Adventureland, Frontierland, Tomorrowland, Main Street, U.S.A. and Liberty Square. Theme park attractions include Space Mountain®, Stitches Great Escape, Big Thunder Mountain Railroad®, Splash Mountain®, Dumbo the Flying Elephant®, Haunted Mansion®, Pirates of the Caribbean®, Mad Tea Party, the famous “It’s a Small World”® and many more!

Disney’s Animal Kingdom® Theme Park – Orlando visitors can run wild with everything from live animals throughout the park and a can’t-miss African safari to dinosaurs and thrill rides like Expedition Everest – Legend of the Forbidden Mountain®, Kali River Rapids® and the carnival-style Primeval Whirl®, as well as chill rides and foreign marketplace strolls even grandma will love.

Disney’s Hollywood Studios™ – Step into the limelight on your vacation as popular Hollywood movies and silver-screen sets come alive with live stage shows, interactive movie-based experiences, back-lot tours, great dining and shopping, plus thrill rides like The Twilight Zone Tower of Terror™, Muppet Vision 3D and Rock ‘n’ Roller Coaster® accompanied by your choice of an Aerosmith song. You can’t miss the entrance, which is marked by a giant red stratosphere guitar.

Disney’s Blizzard Beach Water Park and Disney’s Typhoon Lagoon Water Park are Disney’s two polar opposite water parks… literally. The first of the themed parks, a frosty ski village, and the other, a laid- back tropical paradise, but both hold water with attractions, thrill and chill rides, and plenty of activities for the little squirts to soak up oodles and hours of family fun.

Universal’s Islands of Adventure®—A high-tech theme park and home to “The Wizarding World of Harry Potter™.” Each “island” highlights adventure with technologically advanced rides such as The Amazing Adventures of Spider-Man® and The Incredible Hulk Coaster®, and more child-friendly rides like The High in the Sky Seuss Trolley Train Ride! Meet the green one himself during Grinchmas if visiting during the holidays, and get ready in 2014 for Universal’s largest expansion and addition of Daigon Alley to its “Wizarding World,” with a unique passage way and a Hogwart’s train ride.

Universal Studios Florida®—Connected by the restaurants, shops and movie theater of the entertainment complex City Walk, the Silver Screen comes alive with simulators, 3-D shows into the TV and movie productions, shopping, dining, movie-based thrill rides like Despicable Me, Minion Mayhem, Men in Black™ Alien Attack, Terminator 2® 3D, The Simpsons Ride™ and Revenge of the Mummy®, and a visitor favorite, Hollywood Rip Ride Rockit® where you strap in, pick a song and scream 17 stories over Universal at 65 mph, then turn your thrill ride into a commemorative take-home music video. New to Universal Studios is Transformers 3-D: The Ride, a next generation dark ride with 3-D, high-definition projected images, 4D sensory and special effects and physical sets.

Wet ’n Wild® Water Park—Orlando’s premiere water park and nation’s granddaddy of them all! Wet ‘n Wild’s innovative cluster of chutes, slides, thrill rides, wave pool, lazy river and thrill rides on International Drive has been putting smiles on Orlando locals and visitors faces ever since it opened in 1977, eventually becoming part of the Universal umbrella of parks.

SeaWorld® Orlando – No one knows H2O and marine life like SeaWorld, home to the legendary Shamu killer whale and friends. The famous marine adventure park is perfect for guest of all ages, and features attractions, educational exhibits, and shows spotlighting whales, dolphins, otters, seals and other marine life in an educational environment that teaches visiting travelers to respect our marine family members. Dine and shop the waterfront, explore the huge aquarium full of tropical fish and sharks, or scream your head of on Kraken® and Manta® while the kids enjoy the giggles of Shamu’s Happy Harbor® and Turtle Trek. New to SeaWorld is the icy world of Antarctica: Empire of the Penguins, literally a chilling and thrilling experience.

Discovery Cove® Orlando – Looking for a tropical paradise that seems miles away from the attractions” Discovery Cove is an all-inclusive twist on the dolphin encounter. Amid the tropical oasis, there’s a freshwater lazy river, free-flight aviary, stingray-petting lagoon, a snorkeling lagoon with tropical fish and reef-dwelling stingrays, a 30-minute dolphin encounter with hugs, kisses and a fin tow across the pond, plus a free park admission tickets to SeaWorld or Busch Gardens while you’re visiting Orlando—plus all-you-can eat and drink, including select adult beverages. Don’t miss the SeaVenture dive experience with some 8,000 species of marine life.